Patna: With less than a month left for the crucial Bihar Assembly elections, the ruling Janata Dal (United), under the leadership of Chief Minister Nitish Kumar, has released the list of all the 115 candidates for the upcoming polls.

As per the candidate list released on Wednesday, Chandrika Rai has been allotted the ticket to contest from Parsa Assembly constituency. Lalan Paswan will contest from Chenari and Bima Bharti from Rupauli. 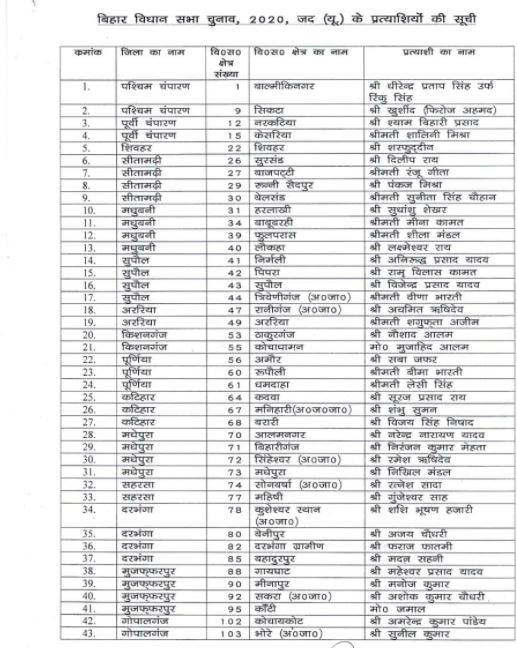 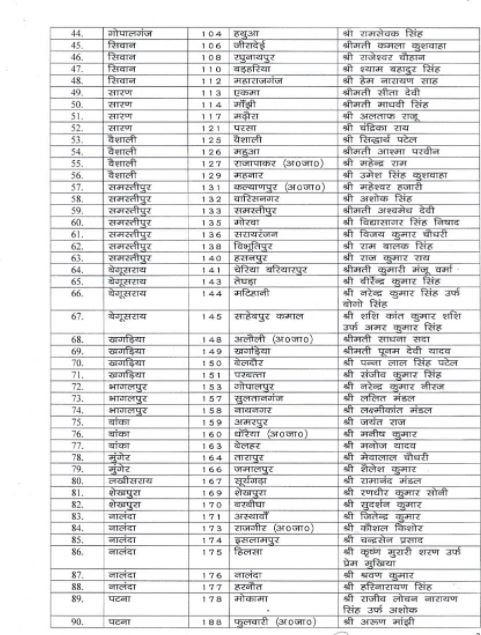 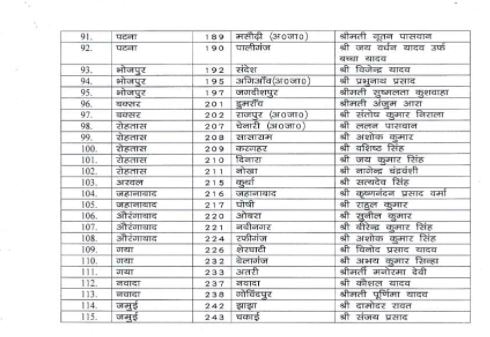 CM Nitish Kumar on Tuesday had announced the much-awaited seat sharing formula for National Democratic Alliance. During a press conference, Nitish said that his party Janata Dal United (JDU) will contest Bihar Assembly Elections 2020 on as many as 122 seats.

He also informed that out of JDU's 122 seats, 7 have been given to Jitan Ram Majhi-led Hindustani Awam Morcha (HAM) under the agreement.

Soon after the announcement, the Bharatiya Janata Party has released its first list of candidates who would contest the crucial Assembly elections on its ticket. The first list mentioned as many as 27 candidates for the seats going for polls in the first phase on October 28.


Earlier this week on Monday, the Rashtriya Janata Dal (RJD) had also released a list of 15 candidates. Following its dynastic principle of giving tickets to second generation leaders, RJD has given a ticket to Rahul Tiwari, son of party veteran Shivanand Tiwary for Shahpur seat; and Sudhakar Singh, son of RJD state president Jagadanand Singh for the Ramgarh seat.


The first of the three phase polling in Bihar is to be held on October 28. The polling for the second and the third phase will be conducted on November 3 and 7 while the results are expected to be out on November 10. Of the total 243 constituencies, 71 will go to the polls in the first phase.

This Republic Day, 26 January 2021 will go down in the annals of history as one that scarred the glo...

SAMBHAV 2020 A Great Performence By Divyangjan